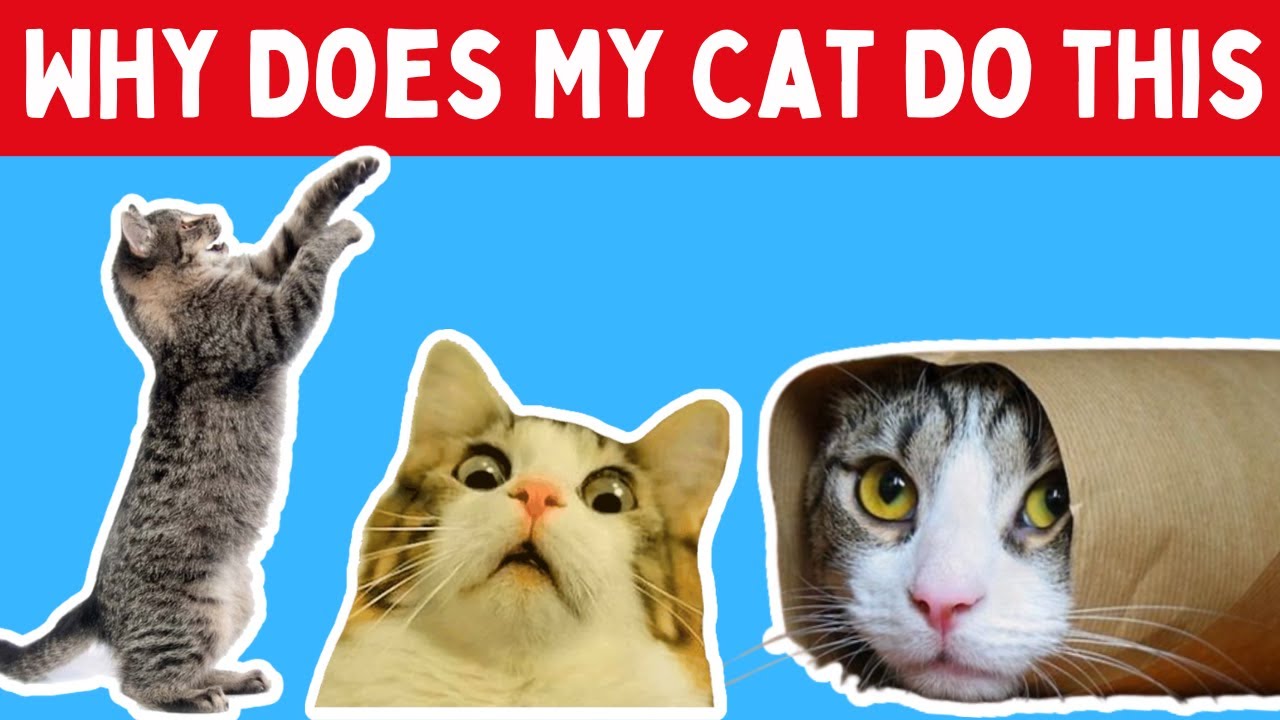 Behaviour
Share on Facebook
Share on Twitter
Share on Pinterest
Share on LinkedIn
Cats have very sweet features. It has two beautiful eyes, adorably tiny paws, sharp claws, and two perky ears which are very sensitive to sounds. It has a tiny body covered with smooth fur and it has a furry tail as well. Cats have an adorable face with a tiny nose, a big mouth and a few whiskers under its nose, Cats are cute, but they also frequently engage in some strange behaviors that people could find strange. What seems strange to you, often has a sensible reason underneath.
the following lists some strangest cats behaviors explained :
.
.
.
.
Chapters
Number 1 Chattering
You’ve definitely heard your cat chattering its teeth quickly and loudly, especially when it’s looking out a window and spotting a bird.
Behaviorists believe this is a result of your cat’s frustration at not being able to go outside and hunt for prey,
They might also be excited and slightly aggravated.
.
Number 2 : Rubbing
Your cat is doing more than just expressing you affection and saying hello when he rubs his head on you.
In reality, he is “bunting,” as behaviorists would say.
His means of exercising control over you is by releasing pheromones from his head.
He is expressing pride in the fact that you are his, much like a cat does when he rubs on furniture to leave his smell and establish his territory .
.
Number 3 : Bring You “Gifts
There are a few theories by behaviorists as to why your cat is so determined to leave you their gifts.
He might be appreciating your care for him or the extra attention you give him .
.
Number 4 : Eating Non-Food Items
Does your cat like to chew on non-edible objects like plastic, metal, inedible plants, wool, or cloth?
This can be a symptom of pica, a rare illness that affects cats.
There are a number of potential causes for this, including mineral deficiencies, anemia, hyperthyroidism, heredity, boredom, and stress.
Number 5 : Kneading .
.
Since their early nursing days, your cat has had the instinct to do this.
His mother’s breast produced more milk when he touched her with his paws.
When your cat does this as an adult, he is either happy and showing it, or he is trying to calm himself down because he is stressed out.
In either case, consider it a compliment that he compares you to his mother.
.
number 6 : If I Fits, I Sits .
The ability of cats to “comfortably” squeeze into small areas never fails to amaze or entertain us.
Small rooms provide your cat a sense of security and safety, and there are many of comfortable locations they could sleep instead.
They wouldn’t want to be exposed in an open space if they were living in the wild because doing so would make them more vulnerable to predators.
Cats naturally have the instinct to ambush prey.
They can keep an eye on and examine their environment from a distance by hiding in tiny, tight places
.
Number 7 Cat Eyes .
Your cat is probably only trying to gain your attention while he is looking you down.
.
Number 8 : 2 A M Zoomies & Cat Calls
Don’t you just love it when you’re dead sleeping and your cat starts running down the hallway, waking you up?
The majority of house cats have a ton of energy that has huge be released because it is stored during the day, along with their nocturnal impulses to hunt at night.
.
.
That is it for this video that explains Most Strangest Cats behaviors that confuses us but there is a meaning behind it .
Hope you enjoy it .
cats, strange cat behavior, cat language, how to understand cats, cat facts, facts about cats, funny cats, cat videos, strange cat behaviors, cat behavior, animals, kitten, weird cat behaviors, cat gestures, cat behavior explained, cat behavior, cats behavior, cat behaviors explained, cute cat videos, weird cats, cute cats, meows of cat, why cats do this, weird cat behaviors explained, weird cat, weird cat behavior, why does my cat, top 10,
.
.
.
.
DISCLAIMER: All content in these videos is used for enjoyment only and complies with fair use laws. No infringement on copyright was intended.
#weirdcats #viralvideo #Cats
Share on Facebook
Share on Twitter
Share on Pinterest
Share on LinkedIn