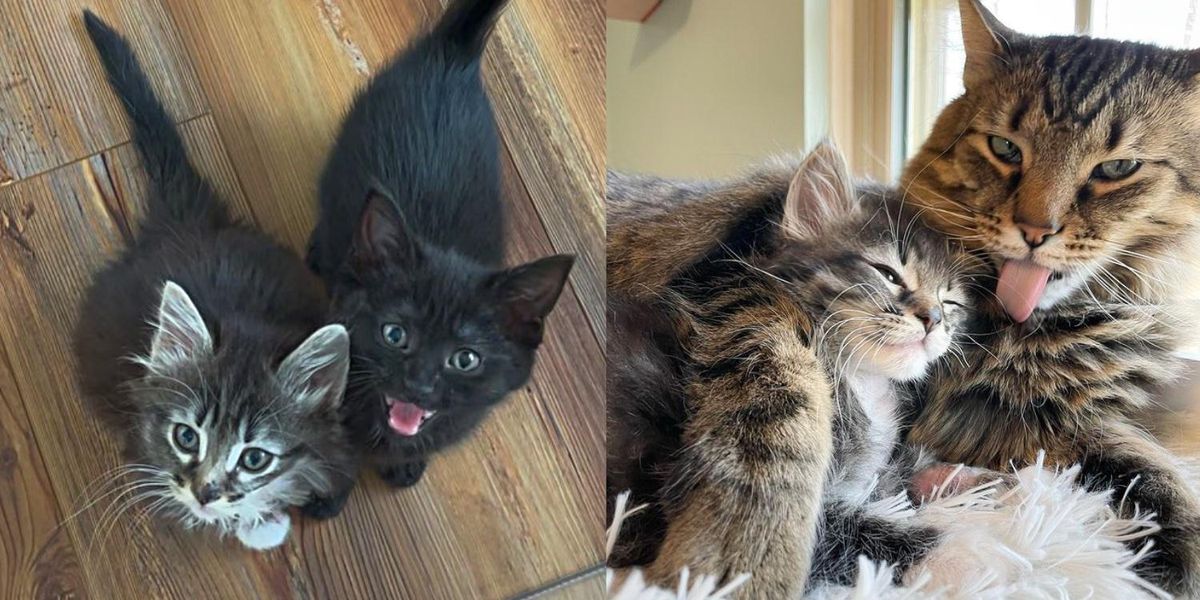 Two kittens who needed a lot of TLC, received the sweetest reception from two family cats. 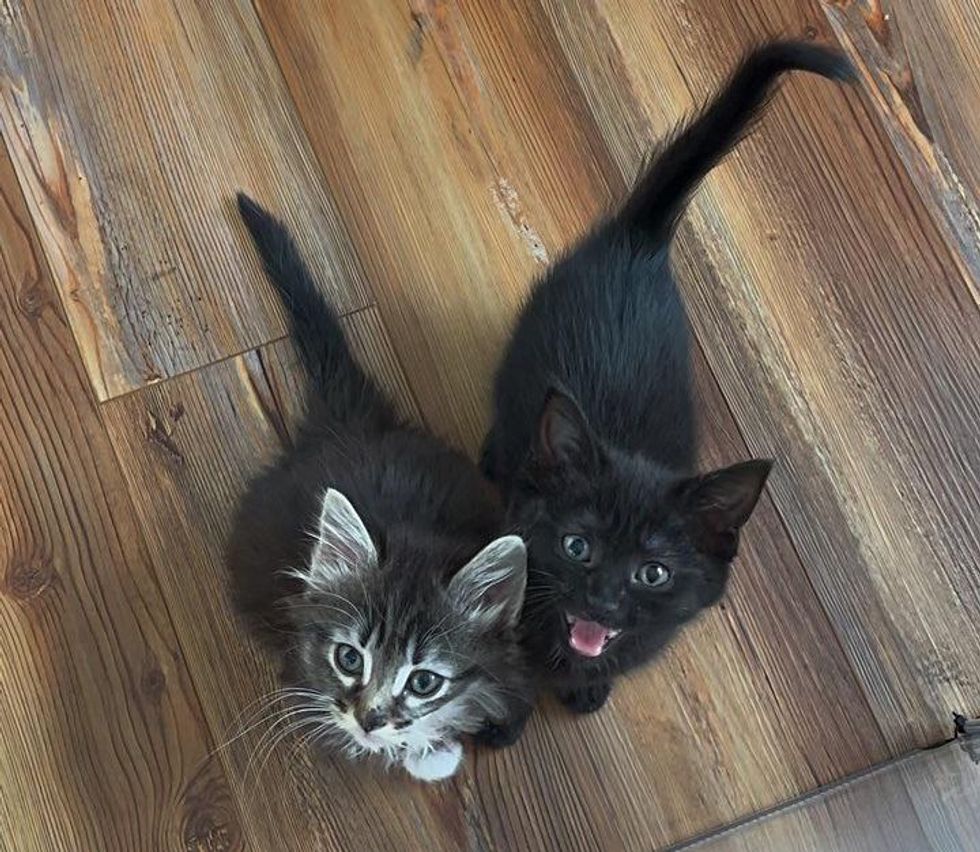 About a month ago, a pair of kittens were transferred to IndyHumane (an animal rescue in Indianapolis, Indiana) for a chance at a better life. One of the kittens came with numerous bite wounds and needed immediate medical attention.

At around 5-6 weeks old, Stella (tabby) and Luna (black) quickly settled into foster care. “Stella was in good spirits despite being in some discomfort (due to her injuries). Luna is a wild child who hasn’t slowed down since exiting the carrier when we got home,” Jennifer, a foster volunteer of IndyHumane, shared with Love Meow.

With antibiotics, pain medication, and supportive care, the tabby girl was finally on the mend. 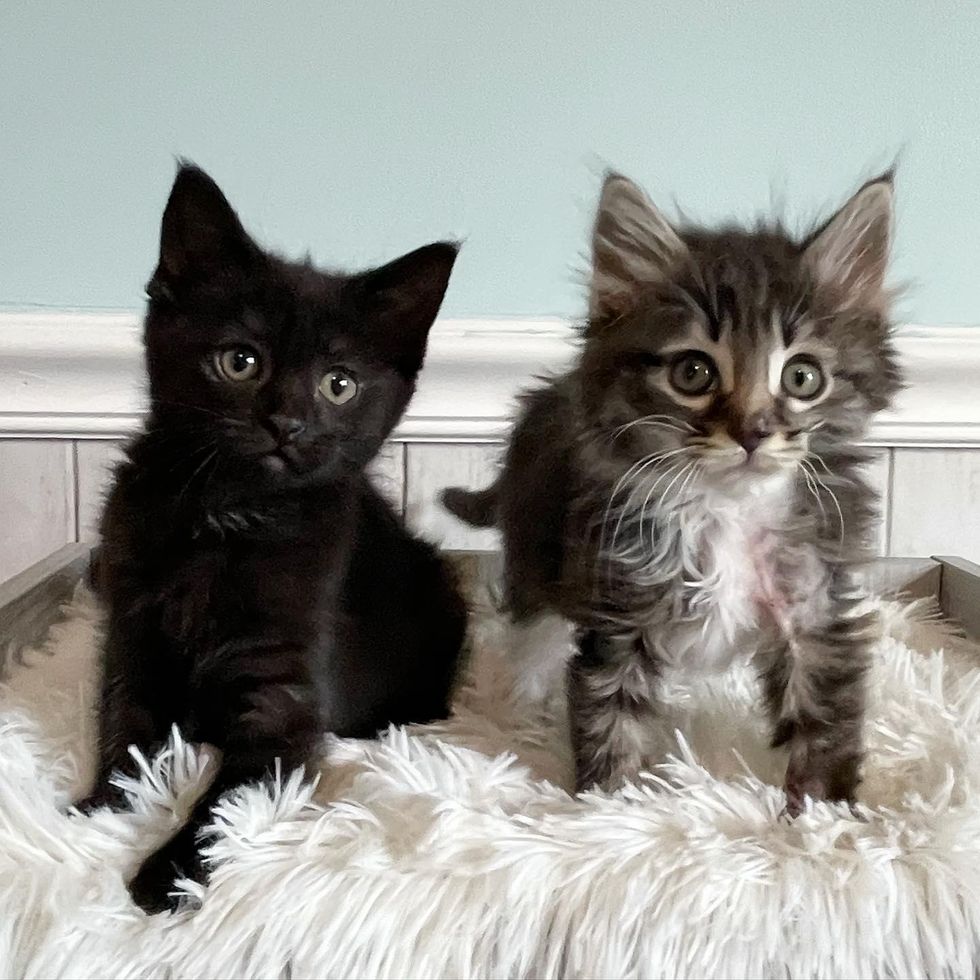 Luna, the rambunctious sister, was always on the go and on the prowl. She outweighed Stella by a few ounces, but was very gentle with her, as if she knew Stella needed extra care.

“The slightest move of any object will catch her attention and have her pouncing,” Jennifer wrote. 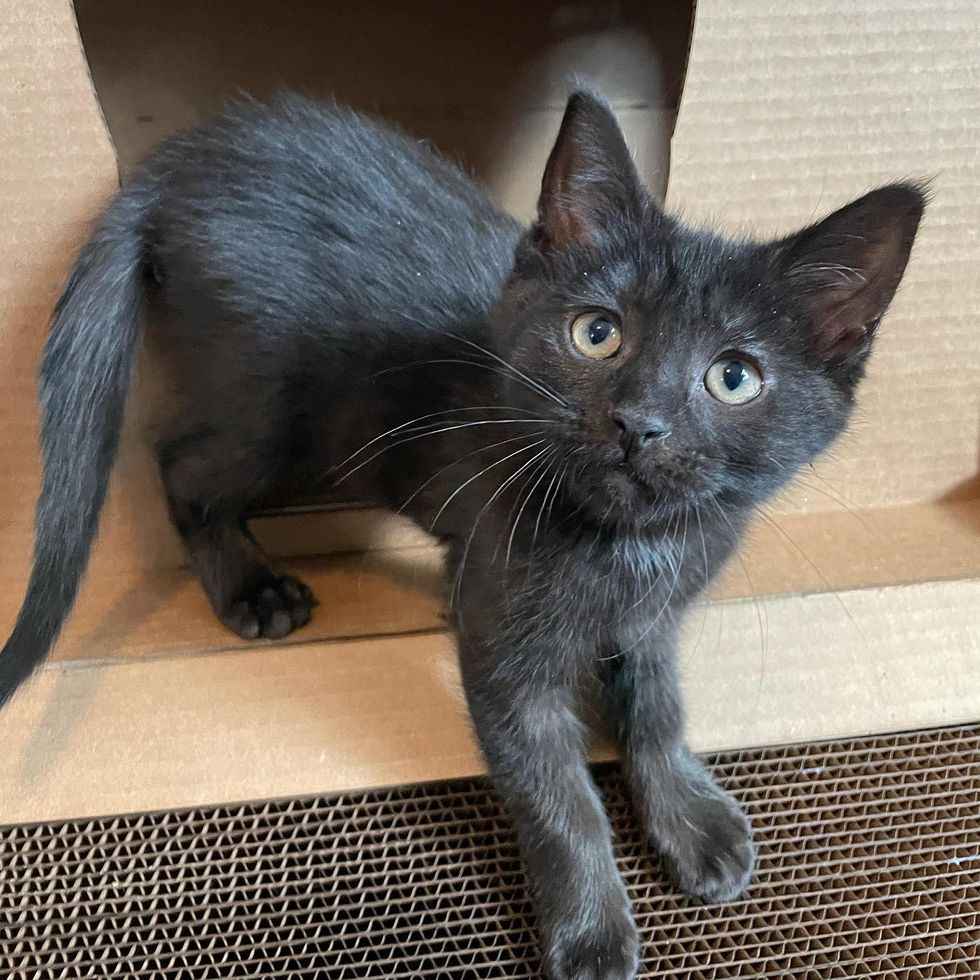 As Stella continued to heal, she became more active and started making biscuits on her blankets. She even tried to match her sister’s energy and sass as her appetite grew.

“Luna has mellowed out a bit now that her sister can keep up with her. She’s still super sassy and growls when she doesn’t want to share (food and certain toys), but she’s so happy to have a playmate again.” 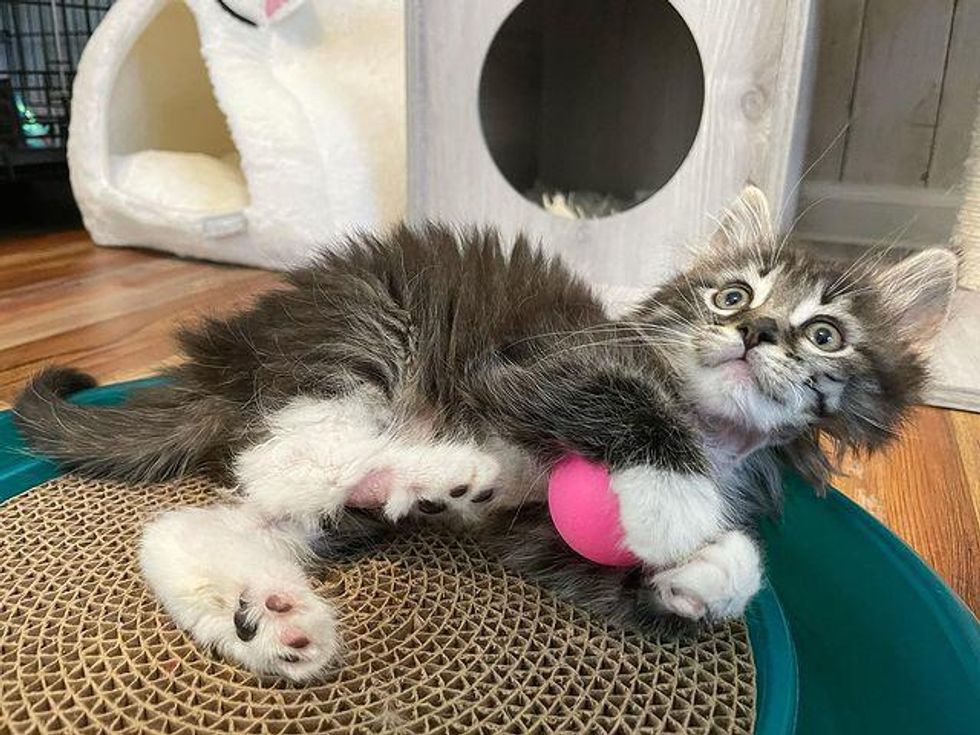 Bodie and Bear, the resident cats, caught wind of the new fosters in the house, and have been anticipating to meet them since. They adore every kitten that comes through their door and have a soft spot for those in need.

When the feline sisters were medically clear for a meet-and-greet, they were intrigued by the resident cats, and eager to follow them around. 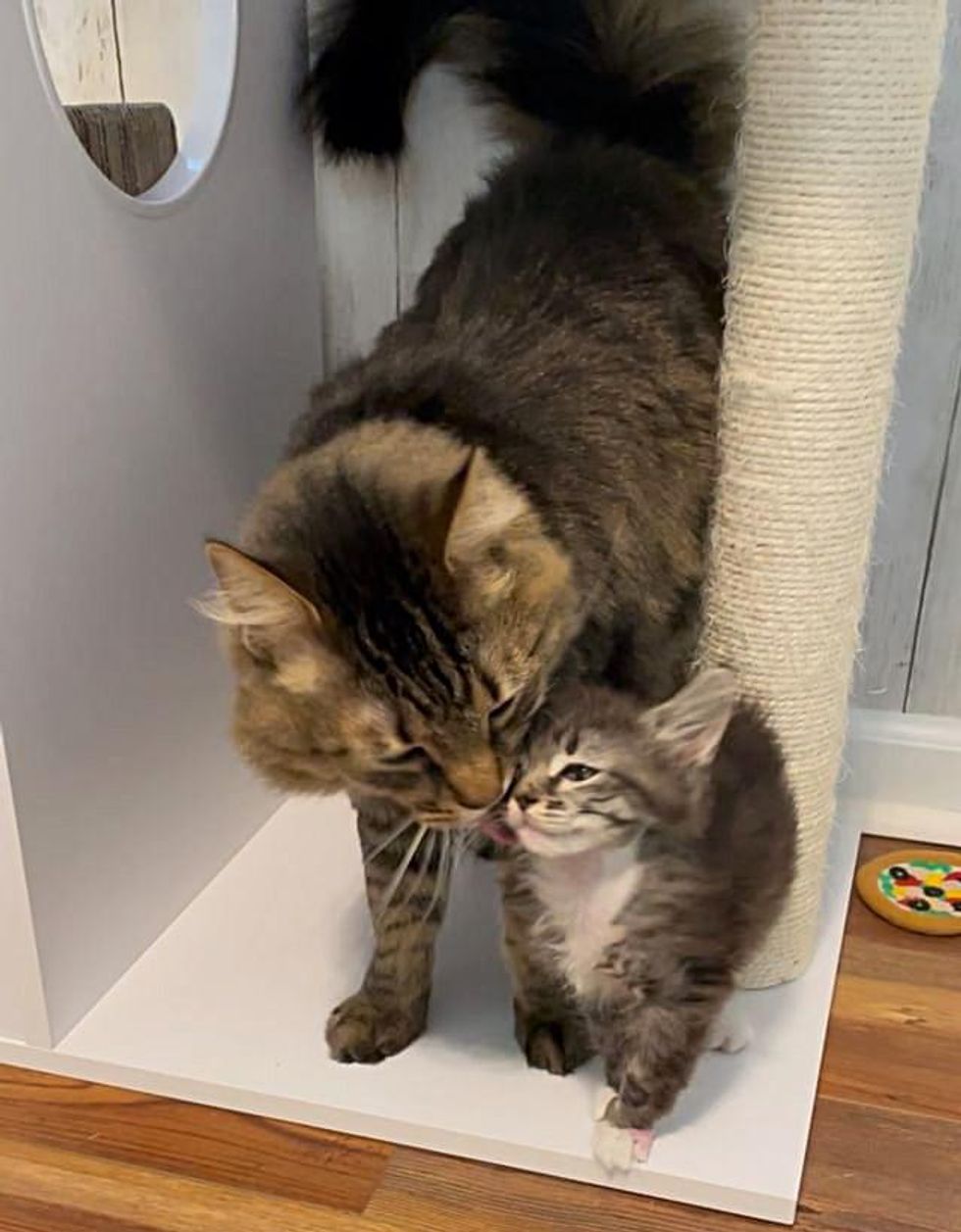 Bodie the resident cat took the kittens under his wingJennifer @newkittensontheblock

“Both kittens took to my cats right away. There is usually some hissing and spiked fur when foster kittens are first introduced to my cats, but that didn’t happen this time,” Jennifer told Love Meow.

Watch Stella, Luna and their kitty friends in this cute video:

Stella and Luna the kittenswww.youtube.com

“Everyone was completely comfortable around each other. We had been without foster kittens for 6-7 weeks, so I think Bodie and Bear were ready to welcome some new babies.” 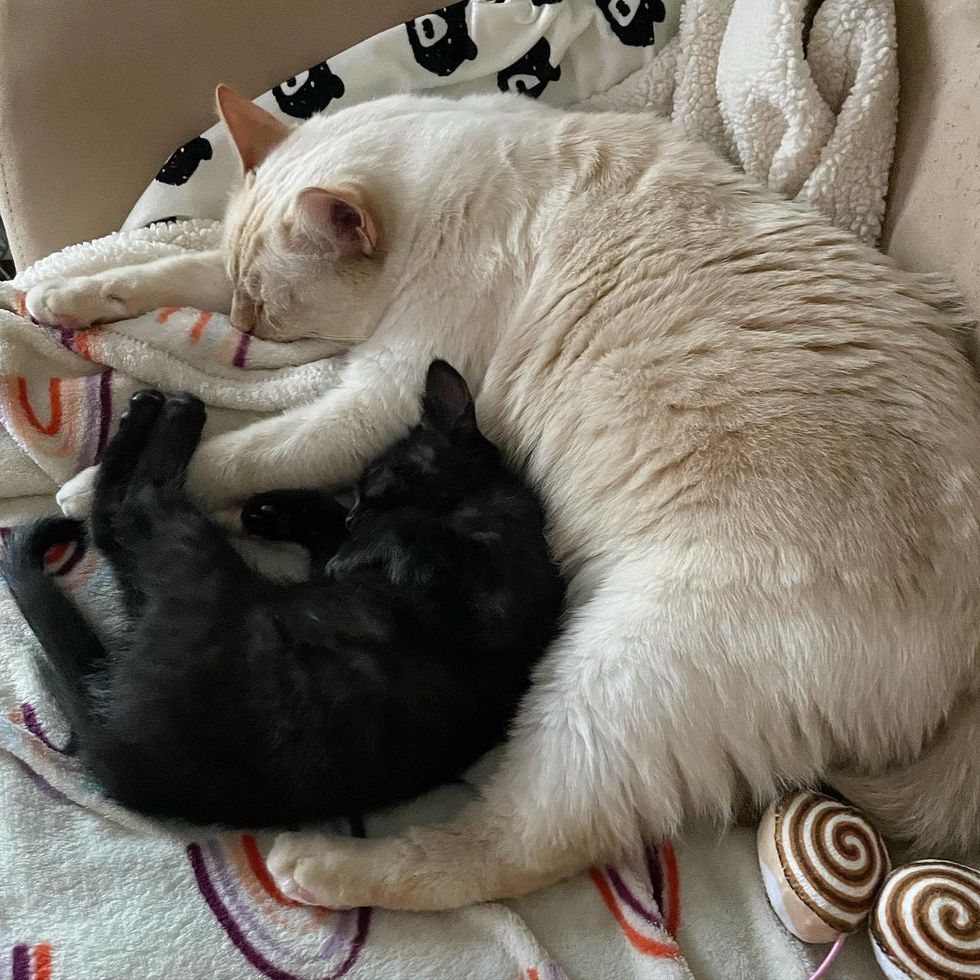 Luna is a social butterfly and constantly demanding attention. “Her meows sometimes sound like a barking or howling dog. She can be very vocal when left alone or wanting attention.”

Stella has made an incredible recovery and blossomed into the happiest little kitten. She enjoys rubbing against the family cats and getting groomed and doted on by them. 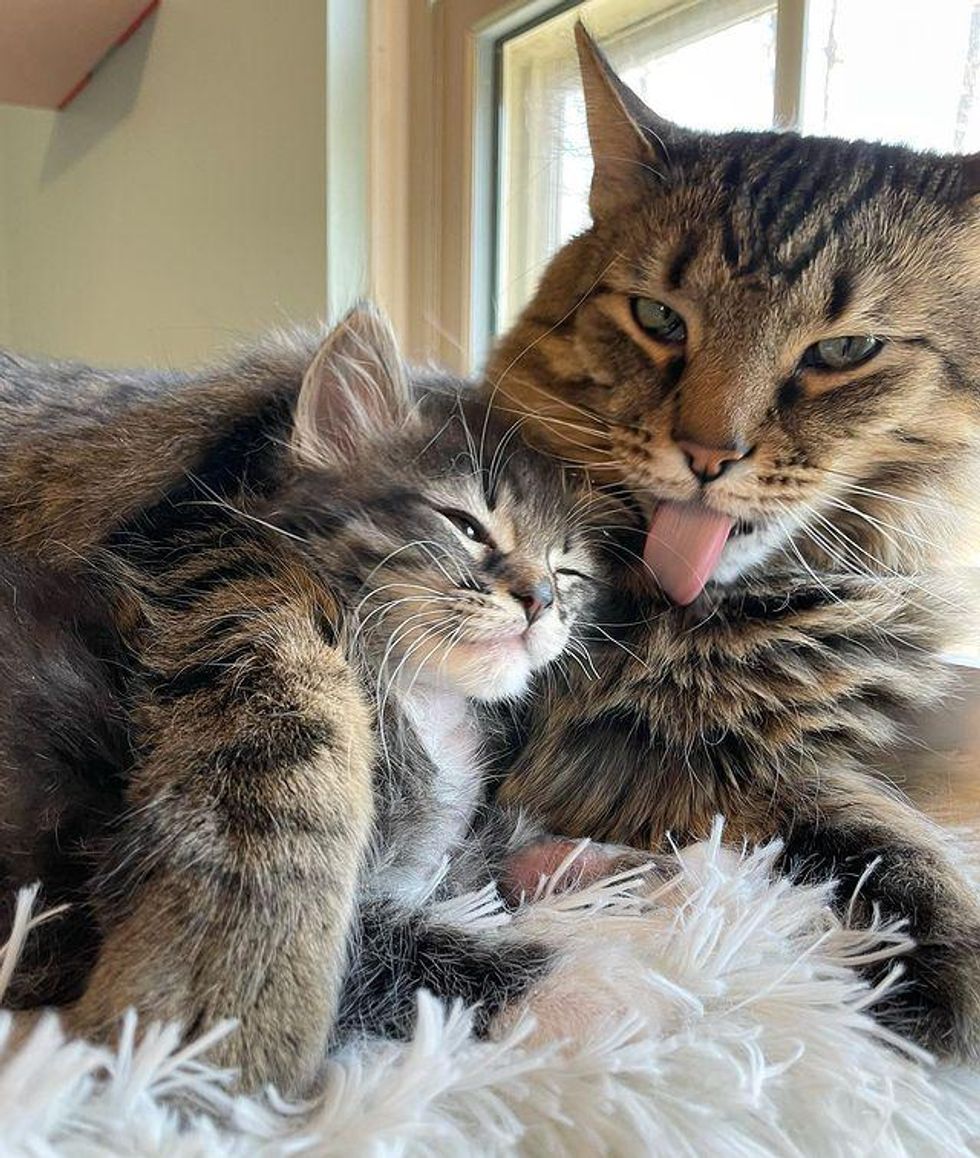 Bodie and Bear have taken on the role of big brothers, showing the kittens the ropes around the house and teaching them proper feline etiquette.

“They’ve sort of paired up. Bear is usually more interactive with Luna, while Bodie seems to like Stella the most.” 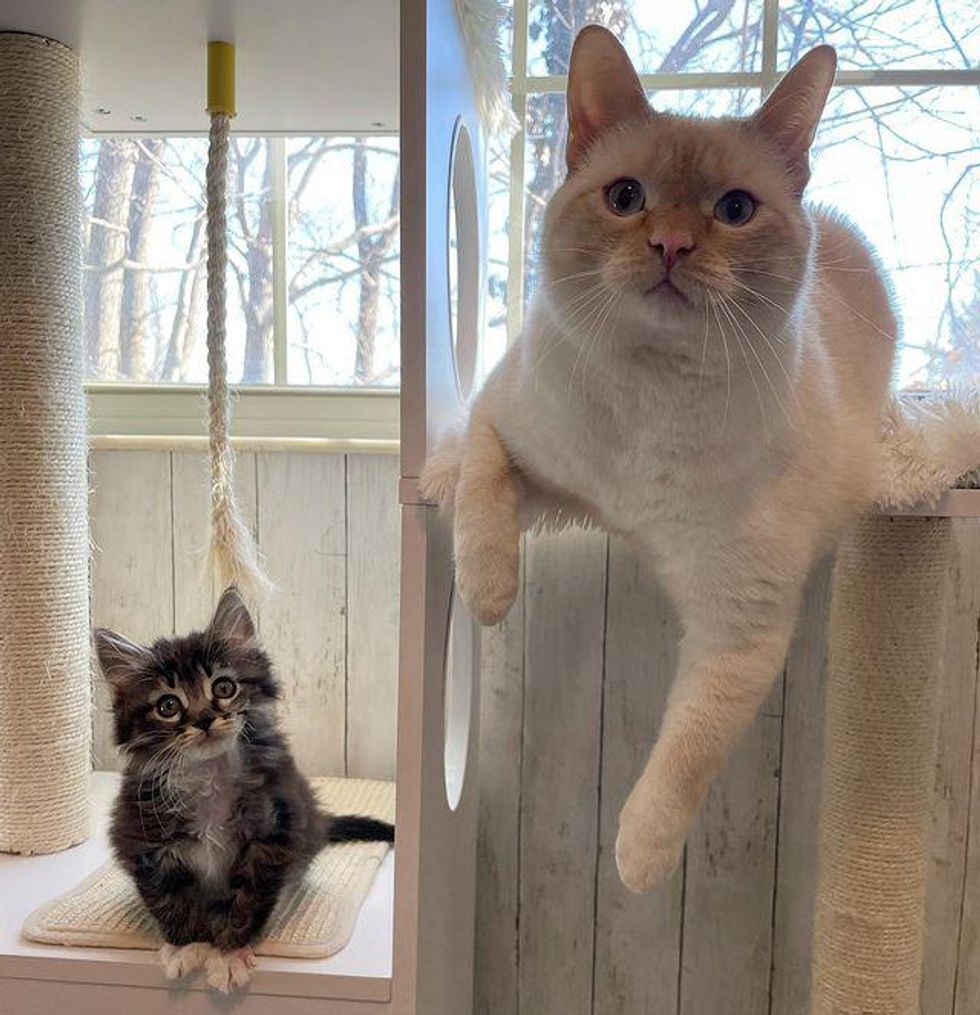 Stella and Luna are thriving and getting plenty of TLC from Bodie and Bear. They still have some growing to do before they are ready for adoption.

For now, they are soaking up all the love they can get from their big brothers, living everyday to the fullest. 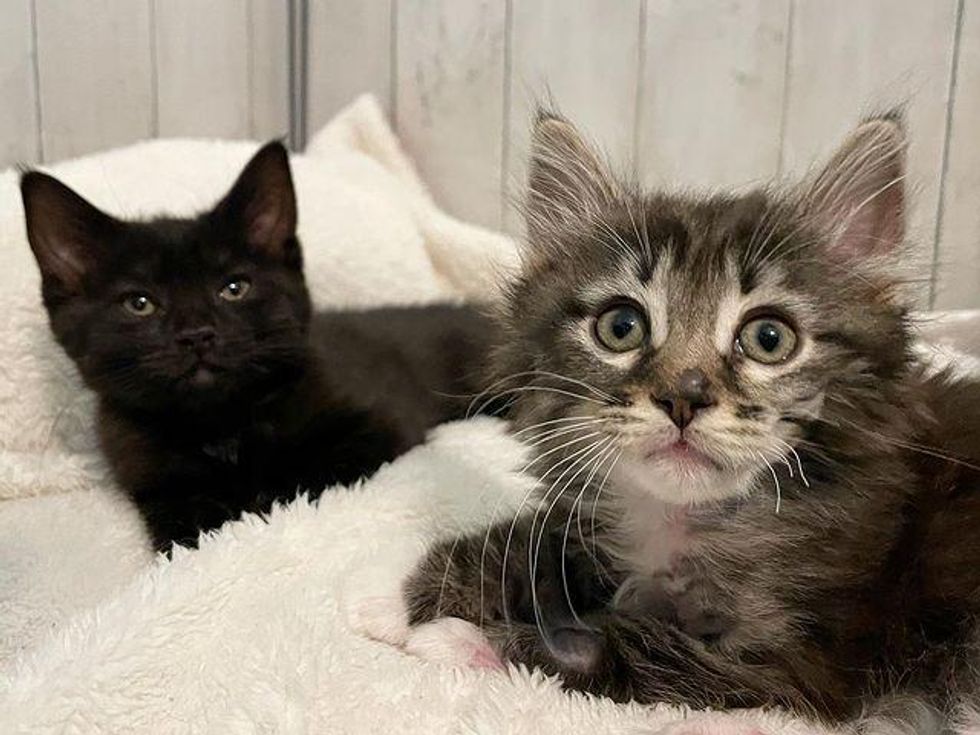 Related story: Kitten Crying Leads Family to Find Him and His Littermates in Bag and Turn Their Lives Around