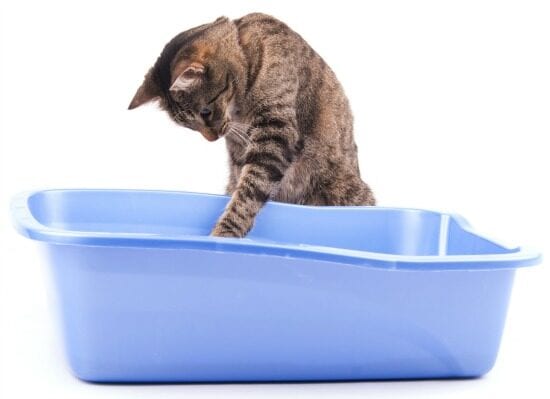 After receiving and turning down the umpteenth pitch to feature or review yet another “innovative” litter box, I feel compelled to share my views on litter boxes, which is pretty much summed up in the headline of this article: simple is (usually) better!

I’m all for making life easier when it comes to cleaning in general, but I simply don’t understand why so many cat guardians feel that keeping the litter box clean is such a chore. It’s just part of sharing your life with cats!

My routine is simple. I keep doggy waste bags under the kitchen sink. Since I work from home, I pretty much scoop as soon as Allegra deposits something in the box (having the litter box right outside my office sometimes makes immediate scooping a necessity!,) I then deposit the filled bag in the trash can in the garage. We have a litter box on each of our two floors, so sometimes, scooping involves going up and down stairs – but I consider that a bonus (extra exercise for me!)

Once every three to four weeks, I dump out all the litter, and thoroughly clean the litter box with hot soapy water, using a non-scented dish detergent. This is probably my least favorite task, but it’s not that big a deal and takes all of ten minutes, if that. Every six months or so, I replace the litter boxes. No matter how well you clean, the plastic will start to break down and eventually absorb bacteria.

Liners and mats are usually designed with the human in mind. Avoid using liners or grids – most cats don’t like them. Be careful when choosing a litter mat. These mats are designed to trap litter so it doesn’t track, but the rough surfaces of some of these mats are hard on soft kitty paws and can lead to litter box avoidance for some cats.

Covered or hidden vs. uncovered boxes

Most cats prefer open litter boxes. While some cats seem to like the privacy hooded or covered litter boxes provide, these boxes are often too small for the cat to comfortably turn around in and do their business. What’s worse is that they can trap odors inside, making them very unpleasant for the cat to use (the equivalent of a human port-a-potty!) Dust can also be a bigger problem in a covered box, as it becomes more concentrated when cats dig.

There’s another reason why I really dislike covered boxes: they prevent guardians from seeing how the cat acts while in the box. Knowing what’s normal for your cat and being able to detect any changes in litter box behaviors can help detect health problems early. A cat who is straining in the litter box may be on the verge of being blocked, which is a life-threatening emergency.

The bottom line: in most cases, covered boxes are for humans, not cats. If you absolutely must use a covered box, at the very least, remove the filters provided by some manufacturers. They’re designed to trap dust and odors inside the box, which may be nice for the humans, but not for the cat (see my port-a-potty analogy above.)

If your cats are using the litter box they way they’re supposed to, don’t ask for trouble by changing anything just for the sake of your convenience. Cats are creatures of habit and changes, especially around crucial resources like litter boxes, may lead to behavioral issues.

We think the NVR Miss litter box is the ultimate litter box, and we have used it for several years. This high-sided box prevents litter from being scattered all over the place, and it’s perfect for vertical pee-ers. It’s also nicer to look at than a homemade high-sided litter box.

Ruby sometimes liked to sleep next to the NVR Miss. She was the reason we got it in the first place, since she was a vertical pee-er, and the NVR Miss was the only box high enough to contain everything.

You can find some of our other favorite litter boxes in our Product Guide.

This post was first published November 2018 and has been updated.

14 Comments on When it Comes to Your Cat’s Litter Box, Simple is Better

What to do if my cat doesn’t let me sleep? – TRAIN YOUR CAT TO SLEEP
Adorable Kittens Who’re In Danger Of The Euthanasia
Our cats get a full health check-up
how to take care kittens Mama cat Vs Papa cat
Little Pandas Take Care of Baby Kitten | Baby’s Daily Routine | Kids Safety Tips at Home | BabyBus